Part pagan, part seasonal,  part religious, part romantic, part revolutionary, part parade, part protest – May Day is a right old hotch-potch of a national holiday. We likely associate it with some kind of spectacle; May Queens and maypole dancing (in villages and towns), a bawdy Fire Festival (Edinburgh) or University students; jumping off bridges (Oxford), running into the sea, possibly naked (St Andrews).  But as 2017 breezes on by, with change and uncertainty all about about us, it feels about right that we don’t really know what we should be celebrating this weekend. What’s for sure is we’re not alone, the first day of May is celebrated around the world, from Maine to Moscow – all in their own uniquely characteristic way.  From Walpurgis Night celebrations of the Germanic countries, to the Gaelic Beltane,  parades of military might in Russia and (quite possibly) demonstrations in France. But May day didn’t start out this way – it has evolved from the Roman Festival, Floralia. A five day flora and fauna festival to honor the Goddess Flora (the goddess of flowers and blossoming plants) and new life. The celebrations included (naked) dancing girls (probably prostitutes), bawdy plays and mimes, gladiatorial games with goats and hares and the throwing of lentil beans (all to celebrate the coming of summer and fertility). The festivities lasted day and night as Romans danced, drank and surrounded themselves with flowers into the night. All very loud, all very louche , all very Roman.

Amazingly in a modern (feminist-tilting) world the May Queen still persists (although her relevance does get debated every now and then).  But she’s as tricky to define as the day itself; for some she represents the Roman Goddess of Flora, for Catholics the Virgin Mary and in folklore The Queen of the Fairies (who rides out on a snow-white horse, looking for mortals to lure away to Fairyland for seven years. Folklore says that if you sit beneath a tree on this night, you may see Her ride by. If you hide your face, She will pass you by but if you look at Her, She may choose you…)

The tradition of Maypole dancing has many roots too; for example in Eastern Europe, a young man goes into the woods on May Eve, chops down a young fir tree, decorates it with ribbons and colored eggshells, and plants it outside the bedroom window of his sweetheart.  In Italy, Maypoles are called alberi della cucagna (trees from the land of milk and honey). Greased with lard and with gifts of prosciutto, mortadella cheeses and money dangling from them, men clamber and climb them in a competition to collect the most prizes. A similar custom has been apparently reported in Wales. In English villages, the Maypole is often decorated with a broom or bush and brought in from the woods; sometimes with girls riding astride it.

For all it’s quaitness now, dancing around the May-pole did once play an important social function –  it enabled romance and courtship.   The May-pole round dance, alternating male and female dancers, weaving in and out, plaiting ribbons as they go, helped the youthful villagers flirt and mingle. And even, reportedly,  spend the night in the woods…The lusty month of May.

Similarly “May baskets,” small displays of sweets or flowers, were also given –  left anonymously on doosteps – as a gift of love. A custom that seems much sweeter in intent than the more verbose Valentine.

So it takes a leap of imagination to understand how a ceremony celebrating nature and fertility became International Workers Day.  It was a hi-jacking for sure, but it was more to do with timing than revolution. By the end of the nineteenth century ideas about socialism and communism  were taking hold across Europe and America.  After a worker’s protest (demanding an 8 hour day) on 4th May 1886 in Chicago ended in deaths (on both sides) the International Socialist Organization called on supporting countries to commemorate on the following May Bank Holiday. And so it became officially recognised as Labour Day in 1890.  It was later, in the 20th century, that Communist countries turned it into a big, showy day of political might and power.

So what should we be doing this Bank Holiday Monday – donning a flowery gown and crown and dancing around a pole? Making merry with goats, and hares and lentils (or maybe just the neighbours will do)? Or parading in heavy-duty overalls for workers rights (afterall we might not have them for too long – the worker robots are probably coming) then?

Maybe we should ask the Romans’ (well they did start it all…) Here’s what Ovid has to say;

“We, too, are touched by honor; we delight in festivals and altars; we heavenly beings are a greedy gang. Often by sinning has a man disposed the gods against him, and a sacrificial victim has been a sop for crimes. Often have I seen Jupiter, when he was just about to launch his thunderbolts, hold his hand on the receipt of incense. But if we are neglected, we avenge the wrong by heavenly penalties, and our wrath exceeds just bounds.”
Ovid Fasti (V. 297 – 304)

Alteratively we could just stay in and

The Wicker Man:  A police sergeant is sent to a Scottish island village in search of a missing girl whom the townsfolk claim never existed. Stranger still are the rites that take place there.

Tess of the d’Ubervilles (2008) Thomas Hardy’s rural classic works well on screen. The story of Tess Durbeyfield, a low-born country girl whose family find they have noble connections. Chose the TV series with Gemma Arterton or the film with Nastassja Kinski 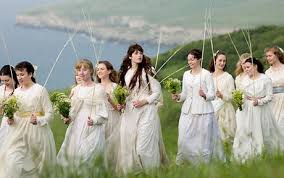 Blood on Satan’s Claw (1971) Horror thriller set in 17th century England about the children of a village slowly converting into a coven of devil worshipers.

Do some flower- arranging: Many May Day customs involve flowers and greenery. Hawthorn is particularly auspicious since it begins blooming when the weather is warm. Anyone who went out into the woods and found a branch of flowering hawthorn (also called may) would bring it triumphantly into the village (thereby bringing in the May) and announcing the start of planting season. However there were warnings about bringing hawthorn into the house, since it would invite the fairies in. Sometimes flowers were given as messages: plum for the glum, elder for the surly, thorns for the prickly, pear for the popular.

And if you have a May Queen or May pole dancer in your house; then you’ll need May blossoms, lily of the valley and sweet peas for their bright colours and rich fragrances.