“Today nearly everybody knows – or thinks they know – the tale of Frankenstein: an unhinged visionary doctor who makes the crude shape of a man from grave-robbed body parts and brings it to life, only to reject his grisly creation and so incite it to seek his destruction. For most of two centuries “Frankenstein’s Monster” has lived again and again, for stage and screen, through cartoon and parody, in toy shops and on cereal box-tops.” (The Guardian)

This week saw the premiere ballet performance (and big screens) of Frankenstein from the Royal Opera House.  This is a gothic, gory story unafraid to show darkness and death, even of women and children.   It’s brave, bold and dramatic (if a bit long-winded). The sets and imagery (as always from the RoH) are stunning. The dancing is crafted and technical. The production quality is world-class.   It lacks the beauty of the more classical ballets (the costumes may fit the setting but are all so brown) and I wanted more awe-inspiring dancing, less didactic storytelling. If you missed it, don’t worry – you can see the encore performance this Sunday (22 May in cinemas) or it’s on stage until 27 May.

It’s a complex story though, one that perhaps doesn’t lend itself to easy visual intrepatation on stage (or on screen) and the reviews have been mixed. Of course the Royal Ballet is not the first to recreate Mary Shelley’s Frankenstein for a modern audience. There have been other types of artistic interpretation;

The 1931 screen adaptation gave us the “Frankenstein monster” look that, arguably,  made the story iconic. There have been many other films since including Mary Shelley’s Frankenstein (1994) with Ken Branagh and Robert De Niro and the latest Hollywood offering,  Victor Frankenstein (2015) starring James McAvoy and Daniel Radcliffe.

Theatre: Adapted for stage since 1822 the last outing here was directed by Oscar-winner Danny Boyle (Trainspotting, Slumdog Millionaire) in 2011 and enjoyed a sell-out run at the National Theatre. It also won awards including the 2012 Olivier Award for Best Actor for Benedict Cumberbatch and Jonny Lee Miller.

Books: There are many editions of the original book. First published in 1818, it was subsequently revised by Shelley to the more popular 1831 version. Discussions on the best often interest academics and readers.

Frankenstein – say it and no doubt a mummy-type monster immediately comes to mind.  An eight-foot, hand-sewn, botched together, giant. Blood stained, yellow skinned, black haired. Ugly, emotionless, speechless; a human devoid of humanity. This imagery probably comes from all those cinematic horror interpretations. The ones that centre on the evil doings of the Creature; to shock and scare and spook the audience.

But those in the know, know there’s much more to the Frankenstein story than an hideous monster.  And it’s in the meaningful thematic translations that we find the real reasons for our continuing interest in this classic. Indeed “Frankenstein” is about love and life and philosophy.

If Mary Shelley were here today she would be invited on every talk show for her views on:

science: warning against the “god-creators” and sciencitfic discovery that dismisses ethics, responsibility and a duty of care;

selfishness: the pursuit of knowledge/interests that engenders selfish (self-absorbed, self-regarding) behaviour with consequences for our nearest and dearest (and even wider society beyond)

secrecy: in his self-engagement Victor keeps everything to himself, his life is one of deceit, lies and furtiveness. This lack of openness with those he loves ultimately leads to their deaths

love and responsibility:  her opinion on the nature/nurture debate about childrearing would decide, perhaps, that nurture is indeed crucial to human development. (A central tenet of the novel is that the creature isn’t born bad, it’s the reaction of others to him, and  his subsequent failure to find love and acceptance, that fuels his murderous deeds).

nature: Shelley uses scenic places (from the Alpine mountains to the Arctic desert) to add drama and to give her characters the possibility of rest and renewal.  The ending comes for Victor when the natural world’s power to console him finally wanes and he realizes that the monster will haunt him no matter where he goes.

fate and free will:  how much do we chose to become who we become or are our lives all fated from birth? This central tenet of the novel was written such a long time ago but even our sophisticated developments in thought, philosophy and science can’t tell us the answers today.

It’s perhaps not surprising Mary tackled such big questions in her first work though.  She was the daughter of philosopher and political writer William Godwin and famed feminist Mary Wollstonecraft—the author of The Vindication of the Rights of Woman (1792). Her mother died shortly after her birth and she was bought up by  her father and her (unloved) step-mother, Mary Jane Clairmont.

She didn’t have a formal education but she did make great use of her father’s extensive library and enjoyed the visits of a number of distinguished guests including Samuel Taylor Coleridge and William Wordsworth to the family home.  It’s recorded that she could often be found reading, sometimes by her mother’s grave. She also liked to daydream, escaping from her often challenging home life into her imagination.

At the age of 17 she embarked on an affair with the poet Percy Shelley. Before marrying him, she lost their first child, her half-sister and his wife committed suicide.  Their own wedded life was not much happier, they lost a further two children (just one son, Percy, lived to adulthood) and there were adulterous affairs before the devastating drowning of her husband (he was out sailing with a friend in the Gulf of Spezia) in 1822. 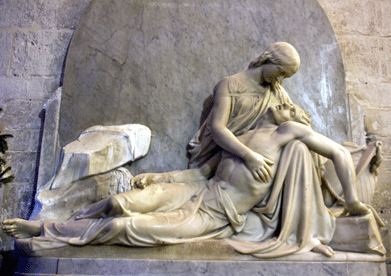 A widow at 24, she found herself with a young son to support. She wrote several other novels including Matilde and The Last Man and devoted herself to promoting her husband’s poetry.  Mary Shelley died of brain cancer on February 1, 1851, at age 53. She was buried at St. Peter’s Church in Bournemouth, laid to rest alongside her father and mother and with the cremated remains of her late husband’s heart. (Source)

A life of interest and intrigue then. But it will probably be for her invention of “the greatest monster in the history of human imagination” (The Guardian) that she will be remembered.  But this Creature still has so much to tells us much about ourselves, and that’s not a bad legacy, really.

Mary Wollstonecraft – how influential was the loss of her mother to Mary’s writing?